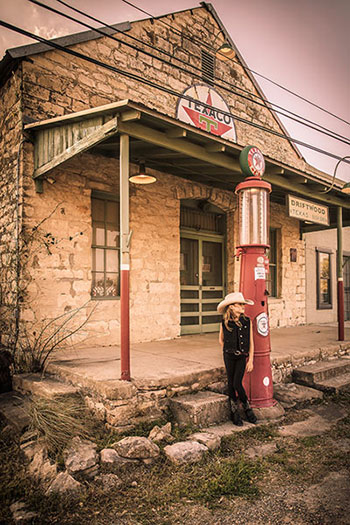 I love capturing old buildings.  In fact, I have a series of old abandoned buildings and places in Oregon that I had previously showcased in a last Thursday event in Portland, Oregon. The series was titled Abandoned Oregon.

Of course when I drove past this old Texaco gas station and general store, I had to take photos.  My husband had just bought my daughter some cowboy boots and I thought to myself, “now if she only had a hat, I could have her pose next to this old gas station.”  I had a vision and decided to go for it.  I’m lucky that my daughter is so photogenic and willing to pose for me.  The only downside was all the cars driving by.  She really did not like this, especially when a woman yelled out, “You go girl!”  I told her that the woman meant well, but she did not like it.  Luckily, I had my shot by this point, so we decided it was time to leave.

Although I shot at sunset for this location, sunrise would be ideal!  It would be ideal not only for the light, but less traffic as well.  I will have to go back at some point and capture this building on it’s own during that time of day.  Now if I could only get myself up that early!!! 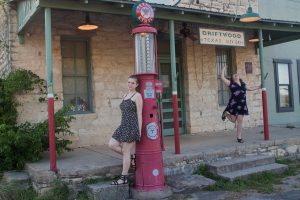 About a month after shooting my daughter at this location, I had a family photoshoot.  There was a request to shoot at this old station.  So we shot some there, then moved to a different location to shoot the rest.  They had a lot of fun during the shoot.  In fact, the shot to the right is one of the more playful images.  There were several more shots, but sometimes we have to add a little fun when taking family photos.  It helps loosen everyone up!

It seems that this may end up being a popular photo location for upcoming shoots in the future!